Hey all, happy March! This month I read a book I have had on my list for a long long time, Grasshopper Jungle by Andrew Smith. Teen Book Fest is only two and a half months away and if you're looking for some great reads by TBF authors, this is a good one to start with! However I would say this book is meant for slightly older teens, and might not be the best fit for younger middle-grade
readers. 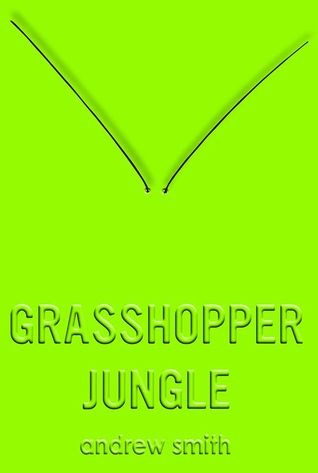 Sixteen-year-old Austin Szerba interweaves the story of his Polish legacy with the story of how he and his best friend , Robby, brought about the end of humanity and the rise of an army of unstoppable, six-foot tall praying mantises in small-town Iowa.


To make matters worse, Austin's hormones are totally oblivious; they don't care that the world is in utter chaos: Austin is in love with his girlfriend, Shann, but remains confused about his sexual orientation. He's stewing in a self-professed constant state of maximum horniness, directed at both Robby and Shann. Ultimately, it's up to Austin to save the world and propagate the species in this sci-fright journey of survival, sex, and the complex realities of the human condition.

A Goodreads review described this novel, saying: "You won't find a YA book out there like this one," a review that instantly intrigued me. And after reading it I am happy to confirm I have never read a book like this.

This book is the perfect mix between contemporary YA fiction and horror, which is not a sentence I think I've ever said. Grasshopper Jungle is, to put it simply weird - and thats exactly why I loved it. The humor in the relationships between characters and in Smith's writing is very strong, and honestly who is not at least a little intrigued by a story about saving the world from six-foot grasshoppers. But at the same time, the contemporary element is what keeps you invested. The main character, Austin, is hilarious and despite making many dumb decisions, was extremely relatable and his internal struggle that carries the book just felt so real, and I loved it. I have never seen a love triangle with a boy choosing between his girlfriend and his best friend and that made this book stand out even more. In reality this is a book is about growing up and feeling lost, which really made it hit hard for me. Not everyone can relate to saving the world from horrific insects, but as humans we all spend our lives trying to feel a little less alone, which Smith captures perfectly.

Smith's books are funny and weird, yet heartbreaking and real, with remarkable characters often with LGBTQ representation. Smith's writing style, just like his books, is unique and quirky in its own way, and I can not wait for Rochester to be able to meet him and experience his ridiculous wit in person. But before May comes around I would definitely recommend checking out Grasshopper Jungle for yourself.

find the book here!
goodreads   amazon   barnes and noble
or check it out at your local library!