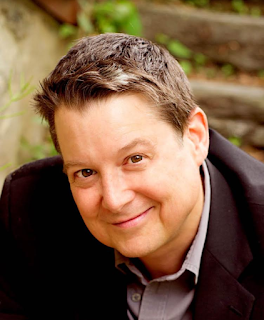 Happy Saturday! I am here to share a TBF author interview with all of you. I chatted with Jon McGoran, author of Spliced. Check it out:

Miranda Reads: Your first YA book Spliced came out in November. What is it about?

Jon McGoran: Spliced takes place a few decades from now, in a world slightly altered by climate change, flu epidemics and technological advancements. Biohackers have made a controversial gene splicing technology available on the street, and some young people modify themselves by splicing animal genes into their own, for all sorts of different reasons. They are called chimeras.

Sixteen-year-old Jimi Corcoran doesn’t think too much about chimeras, but when her best friend Del finally escapes his sadistic father, she is horrified to learn he intends to get spliced. As Jimi plunges into the world of chimeras to save Del, the rest of the world erupts in a backlash against them, and the group Humans for Humanity, or H4H, pushes through a new law that strips chimeras of their rights as people.

As Jimi learns to respect, understand and even love the chimeras she meets, she also learns a terrifying truth: Those behind the backlash have a hidden agenda more hateful and horrific than anything she could have imagined.

Miranda Reads: What was the inspiration behind Spliced?

Jon McGoran: There were many inspirations behind Spliced. The first came while I was researching a series of biotech thrillers I wrote, Drift, Deadout and Dust Up. I read about some biohackers or DIY biologists, who are doing genetic engineering in garages and basements. Some of them are highly educated and trained and some know just enough to splice different genes together and see what happens. On the one hand I thought it was really cool—a democratizing force in science and part of a great tradition of amateur citizen-scientists. But I also thought it was really unsettling, because things could go very wrong. I knew immediately I wanted to write about it in some way.

Initially, I thought about some horrible plague that escapes from a garage somewhere, but then I wondered what would happen, given a little time, when today’s cutting-edge technology becomes so commonplace and so accessible that it’s available on the street. I knew that if it was possible to splice animal genes into your own, there were people who would do it—I was sure of it. But then I had to wonder why, and the answer was, for a whole lot of different reasons.

I figured it would take a few decades for gene splicing to become available on the street, and that meant a world in which climate change was having more and more of an impact, and that a lot of animals at risk of extinction now would be gone by then.

The idea of the chimeras resonated with me. Getting spliced is a big deal, and fraught in ways, but it is also really empowering in how these young people are proactively deciding who they want to be, which is part of what young adulthood is all about.

But I also wondered how the rest of society would react to the chimeras, and looking around at the world today, I knew it wouldn’t be easy. A lot of the book is about the bigotry and hatred and exploitation the chimeras face.

Miranda Reads: Do you have a favorite snack or drink when you write? If so, what is it?

Jon McGoran: I try not to snack too much when I write, partly because if I do, I just go on autopilot and snack until whatever I am eating is gone. But I am partial to a nice hot cup of strong, black coffee.

Miranda Reads: Latest favorite book that everyone should read?

Jon McGoran: Right now I’m reading Hello Universe by Erin Entrada Kelly, and I'm loving it. I finally just read Starters by Lissa Price and that was amazing, too. And I loved Scythe by Neal Shusterman and can’t wait to read Thunderhead (my wife, who is a librarian, just finished it and she keeps telling me to hurry and finish what I'm reading so we can compare notes on Thunderhead!)

Miranda Reads: Which TBF Author are you most excited to meet this year?

Jon McGoran: I'm excited about a lot of them! I heard (and briefly met) Barry Lyga at a conference a few years ago when I was considering writing my first young adult novel, and he was part of what convinced me to give it a try, so I’d like to thank him for that. I’d love to meet Roshani Chokshi and Bruce Coville (and if I get a chance, I hope to tell Rachel Hartman how much my wife loves her books!).

Thank you so much, Jon! We can't wait to meet you later this month at TBF!

You can purchase Spliced at Barnes and Noble or Amazon (Be sure to use Amazon Smile and make the Greater Rochester Teen Book Festival your charitable organization) or check it out at your local library!

That's all for today! Be sure to check out the blog again for more author interviews, book reviews, and fun posts!