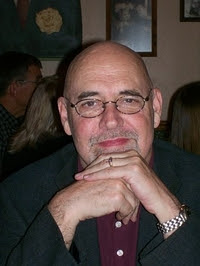 I have the first TBF Author Interview of the year! No surprise that the first author I interviewed was the one and only Terry Trueman.

A little side note before I get to the interview. My first time coming to TBF, the author who really stuck out was Terry Trueman. He was hilarious and sarcastic. When I met him at the autographing session, I won't lie, I was extremely nervous but Terry was one of the sweetest authors. He definitely reminds me a lot like a cuddly teddy bear.

Miranda Reads: For people who are coming to TBF for the first time, author or fan, what advice would you give him, TBF mascot?

Terry Trueman:  I’d advice them NOT to become a TBF author mascot, as a 195 lb, 6’ tall man looks BAD in a tutu, even if it IS a black tutu!

(Honestly, Terry, you rocked that tutu. Don't you guys agree?)

MR: What motivates you to keep on writing?
TT: I generally love to write. I’ve been lucky and blessed enough to get to write only about the things I want to write about. I love it. Motivation is never the problem, the problem is balancing the time I want to spend writing with the time I have to give to what lesser mortals call “a life”.﻿

TT: Hmmm, good question. HURRICANE required both some research as it was based on a real event in Central American (Hurricane Mitch in Oct 1998) and also it had been so many years since I’d been in Honduras, so I had to go back to old memories--but I wouldn't say it was ‘hard’ just a bit harder than the others. Easiest? Impossible to say but probably LIFE HAPPENS NEXT because I’d had so many years to think about what might happen next in the life of Shawn McDaniel, protagonist of STUCK IN NEUTRAL my first novel.

TT: Comedy, definitely a comedy routine. I’m pretty funny, at least to myself.


MR: Which author are you most looking forward to meeting at the 10th Annual Greater Rochester Teen Book Festival?

TT: I haven’t looked at the line-up yet but I hear that Amy King (A.S. King) will be back again with her husband Topher and I absolutely adore both of them--I have been at EVERY TBF and have met so many great authors and made so many pals. I tend to gravitate initially towards pretty women and funny guys but I try to never dismiss anyone. I’ve found that most authors, given half a chance will admit to how lucky and blessed we feel and once we start sharing that, the rest comes easily. TBF is great because it gives authors plenty of time to really hang-out together and every Y.A. author wants to be invited and invited back so all of us are on our best behavior--even though James Kennedy’s best behavior is worse than most everyone else’s worst behavior (Hmmm, thinking about that, it’s probably true for me too!) LOL

Thanks Terry! We can't wait to see you in May!

That's it for today. Here on the TBF blog, we all wish you a Happy Thanksgiving!
Miranda
Posted by miranda e. at 11:12 AM No comments:

ROC the DAY for TBF


Help ROC the Day for TBF!
December 2nd is a major day for Rochester…and for The TENTH Annual Greater Rochester Teen Book Festival.  Fans can donate all day to TBF to help keep it FREE to attend.  Please consider helping us ROC the Day so we can continue to rock TBF!  We need just $3200 to meet our fundraising challenge goal…which will mean that many TBF planners will have to color their hair Tie-Dye colors with one special person agreeing to have her head shaved on TBF day if we meet the goal!  On December 2nd visit here to learn more and to ROC the DAY for TBF: https://www.roctheday.org/TBFGreaterRochesterTeenBookFestival
For more info about TBF 2015 visit http://www.teenbookfestival.org/

Thanks everyone! Be sure to check out the blog again for more book reviews, author interviews and more.
Miranda
Posted by miranda e. at 11:05 AM No comments:

Email ThisBlogThis!Share to TwitterShare to FacebookShare to Pinterest
Labels: news, Roc the Day

On another note, I want to thank Laurie Halse Anderson for coming to the TBF Read-a-Thon. It was a huge hit! We loved having Laurie with us.

Laurie Halse Anderson with her birthday cake!
That's it for today. Be sure to check out the blog for more book reviews, author interviews and announcements!
Miranda﻿
﻿
Posted by miranda e. at 9:32 AM No comments: